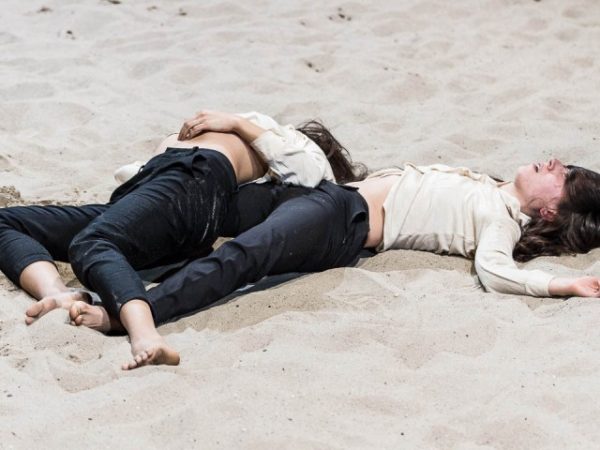 She studied contemporary dance at the Institut del Teatre.Â In 2008 she danced for Roberto Olivan in Kiosco das Almas Perdidas, in 2009, for Bruno Caverna in Mindscaping and Carlos Pez in “Object Choreography”.

Since 2009 she began a long collaboration with Lisi Estaras, “The Ballets C of the B” and dance in several creations as Bolero, Caracol, Primero and more recently, Monkey Mind. Since 2015, she collaborated with Lali Ayguadé.

From 2011 onwards, she sets foot in the circus and participates in the creation of Las fuyants of The things of Nothings company, or La máquina de juego of Camille Boitel. In 2012 she’s and interpreter for James Thierrée for Tabaco Rouge. As a coreographer she debuted in 2010 with Ikvot, a piece by Rogelio Rival Circus. Her taste for the creation was confirmed in 2014 when she began a choreographerhic search in the sand with Sabina Scarlet.

The result of this collaboration was presented at the Teatro de la Balsamina in 2017, by the name of Uniforme, a piece that carries out an immediate dialogue with a choreographic material of falls and decompositions, and the evolution of a scenography of the sandcastles, in turn, destroyed.

Her interest mixtures of disciplines opened the door for her to create proposals for contexts not strictly scenics, surrenderd herself with multidisciplinary artists. In 2016 she co-founded  Objectif Plutón, a collective formed by musicians and dancers with Quentin Manfroy (flutist) and Benoit Armange (dancer and circus artist).