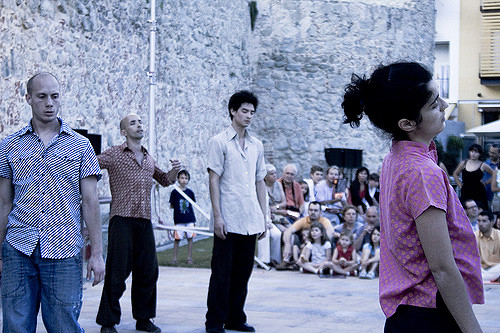 Lives in Barcelona, where she develops her work as an performing creator and at the same time studies Fine Arts at the University of Barcelona where she develops projects related with the image.
Ariadna studies dance in Barcelona and later in Amsterdam. In 2007 she receives the prize for the most outstanding interpretation of the International Dance Festival of Gran Canaria 12Masdanza with the piece Interrupted, by Pierre-Yves Diacon. Between 2007 and 2008 she creates the series Y ahora nos preguntamos juntos, the solo Blind Steps And Wet Fingers and the piece Opaline, this last fruit of the collaboration with the artists Pierre-Yves Diacon and Ariadna Serrahima. She also has worked as a performer and direction assistant in several pieces of other emergent creators. Now she dedicates big part of her energy developing her own work as a creator and carrying out two new projects, Solo para Moqueta Roja and Economies de la presència. The artistic practice of Ariadna reflects about the scenic device, each work is an only formulation that articulates the diversity of referents, languages and tools in a particular way. In her work, the look and the encounter with the public are a key element in the articulation of the proposal, as well as the visual and plastic aspects, and the conceptual basis.