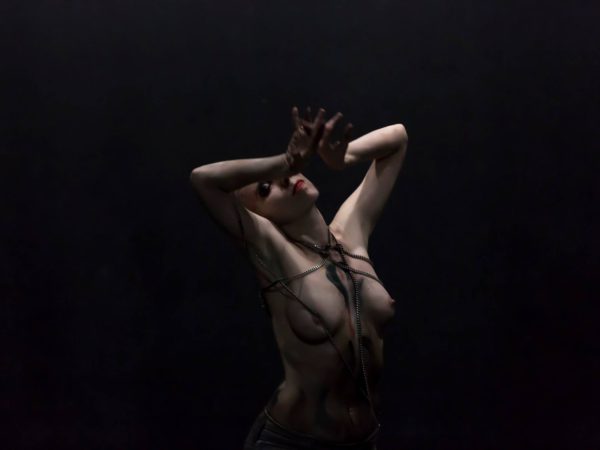 My name is Bárbara Sánchez. This is the name I use to sign contracts and pay taxes. Then there are the others. All of those that have arisen along the way. They’re not different, they’re not identity leaks, they’re possibilities that have unfolded over time. The others serve to reveal fractures and different perspectives of an impossible self-portrait that is always blurry and unfinished. Ever since the beginning, I have observed my reflection. That’s where I find the need: from the other side, sometimes there is a call that seems like an inevitable fall. The outburst always comes before the logic. From there, Isadora, La Pálida and Ella came into being. Now “Várvara” has arrived, the mistik bakala guru.

Text about the proposal in residence – 2019:

Rather, she is solo. A woman alone on stage, supporting the entire proposal on her body. This classic image within the history of dance is a launch-pad for this stage research project dedicated to exploring the limits between choreography and ecstasy.

Taking the idea of “choreopolitics” suggested by André Lepecki as inspiration, “Várvara” proposes an approach to the idea of outburst. Outburst as a boost that releases the movement from any control or monitoring. Outburst as the possibility of a free choreography. Freedom as a mandate.

“Várvara” revisits the culture of sound that blossomed from the beginning of the 80s in eastern Spain and became known as “bacalao music”. Beyond the later demonisation, this movement led to the appearance of a crack of freedom that later we would make sure to purposefully silence and ignore. Around that electrical, radical and essential affective sound, a culture started to grow where dance was the expression of a possibility of resistance and freedom. An escape from the logics of day and night. Dancing until collapse.

Dramaturgy in collaboration with: Jaime Conde-Salazar