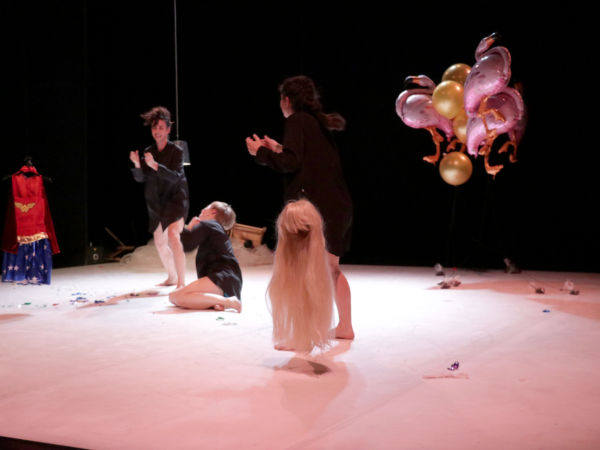 Big Bouncers Collective: Anna Rubirola , Cecilia Colacrai and Mireia de Querol.
The three of them are choreographers resident in Barcelona. At the moment they manage the activities of the Associació La Visiva and they are part of the new project of La Caldera. They all have a trajectory as choreographers, making their own work or in collaboration with other artists, as well as with the pedagogy of dance. The Collective has received the Price Premi Sebastià Gasch, Aplaudiment a la creació emergent, FAD 2015, for the piece BIG BOUNCE.
They start to work together in May 2012, sharing interests and developing a common practice, with the goal of researching and depening their knowledge in the field of movement and performance, and also of generating their own working methodology. From the begining of their work as a collective, they have developed three diferent lines of action: the creation of pieces for stage, the creation of performances for non conventional spaces “site specific”, and the pedagogy. Until now they have created the pieces: Big Bounce (2013), Big Bounce Site Specific (2013), Doppelgänger (2014), I see a spider on the wall (2014). They are currently working on their new creation ‘O.V.N.I’ to be premiered at the Festival Sismògraf de Olot on April 21, 2017.