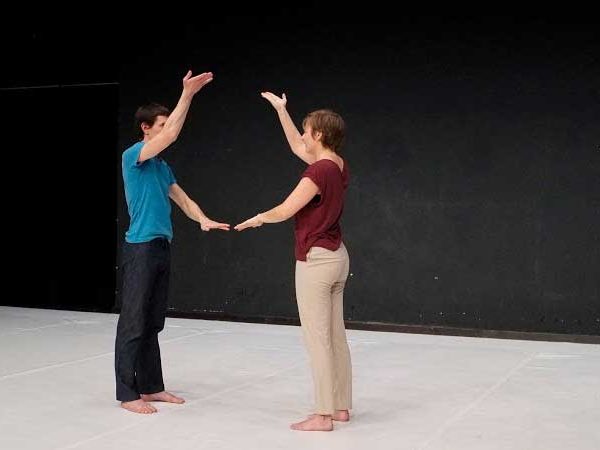 Mandafounis & Mazliah have known each other since the years of childhood and after independent and successful dance careers, they re-met each other in The Forsythe Company, where they first got to know Zarhy in 2005. The two were dancing at the company while Zarhy was assisting during that creation. After seeing each others’ work: Mandafounis & Mazliah’s duo “P.A.D.” (2007) and Zarhy’s solo “Y” (2008), the three felt that they shared an interest in a sort of bareness of work, where the essential elements of what choreography might be are questioned. They then decided to collaborate on their first common creation “Z.E.R.O.” in 2009.

Since then the trio has created many stage works as well as “enacted thoughts” – choreographic works which take place outside of the theater space and reposition choreography in the realm of social and public spaces.

Their work has been co-produced and presented worldwide and they have been based in Geneva Switzerland and in Frankfurt Germany, where they are currently based. MAMAZA has been Associated Artist in deSingel theater in Antwerp Belgium for the season 2011-2012 and a resident company in Kunstlerhaus Mousonturm Frankfurt thanks to the support of the Doppel Pass program of the Bundes Kultur Stiftung Germany between 2012-2014. With their piece “Pausing” (2012) Ioannis Mandafounis and May Zarhy have been selected to be part of Modul-Dance 2012 and the “Reso – Réseau Danse Suisse”. Between the years 2013-2015, the company was touring with the project “ASINGELINE” in different African countries thanks to the kind support of the Goethe Intitut. Since 2015 the company is run by Fabrice Mazliah and May Zarhy.