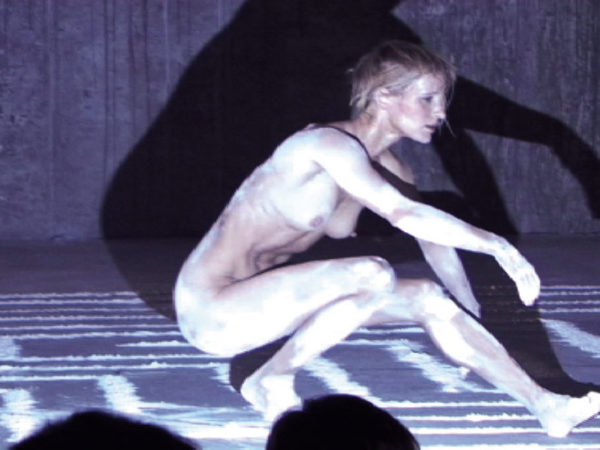 Juschka Weigel starts her studies of dance at ‘Colombo Dance School’, in Zürich. After she finished successfully her three-year course, she received a six-month scholarship for ‘Merce Cunningham School’, in New York, accomplishing her basic dance education. After this period she received another scholarship for the ‘Academy of Art’, in Solo/ Indonesia. Since 1999 she studies Indian traditional music with master Pandit Sankha Chatterjee.

In Germany she co-founds the dance company ‘Verwandlungsamt’, under the direction of Butoh master Anzu Furukawa. At the same time she learns the movement method ‘Dharma Body Work’ (DBW), directed by Mikki Bleidner and Peter Laros.

After investigating the synergy between dance, butoh and body work with  Josef Kiss (1997-2000), they release their first work in collaboration, ‘How is this for a start to your day?’, a dance solo, first performed in the 5th International Festival for Solo Dance of Stuttgart, where she received the 2nd Prize for Choreography and the Special Prize of the Public. This piece gained the 1st Prize at the 7MASDANZA, International Dance Festival of Maspalomas, Canary Islands (Spain), in 2002. During this period she creates successful individual and collective choreographies for stage, film and multimedia productions. She works with different choreographers in Germany, Belgium, Spain, Austria and Sweden.
The solo pieces ‘Up Close and Personal’ and ‘Im Imperfect’ where first performed during the summer 2002. Her Solo choreography, ‘Grace under presure’, with the support of DBW, was first released in Berlin, October 2002.
‘It´s spooky’, her first long piece, has been performed in Germany, Spain and Southamerica from the end of 2002.
In 2003 she creates with the choreographer and dancer Simone Willeit the piece ‘Ungemein’, awarded with the 1st Prize of Group Choreography in 8 MASDANZA International Festival 2003. During the summer 2003 she tours around Spain with the pieces ‘Up Close and Personal’, ‘Grace under pressure’ and ‘How is this for a start to your day?’, successfully performed in cities as Barcelona, Sevilla, Santiago de Compostela and Granada.
From November 2003 until February 2004 she tours around South America and works as Dancer in Residence in Santiago de Chile, preparing her second long solo, ‘Life is too short to dance with an ugly man?’, first performed at HAU3 (Berlin) and selected to take part at AEROWAVES 2005 (The Place – London), among other festivals around europe and south america.

The company releases its first group choreography: ‘the postpianoman surrender ’ in december 2007. This project was awarded with the 7è Premi d’Arts Escèniques de Lleida, and was co-produced with Mercat de les Flors (Barcelona) with the support of ‘IDEE – Initiatives in Dance through European Exchange’.