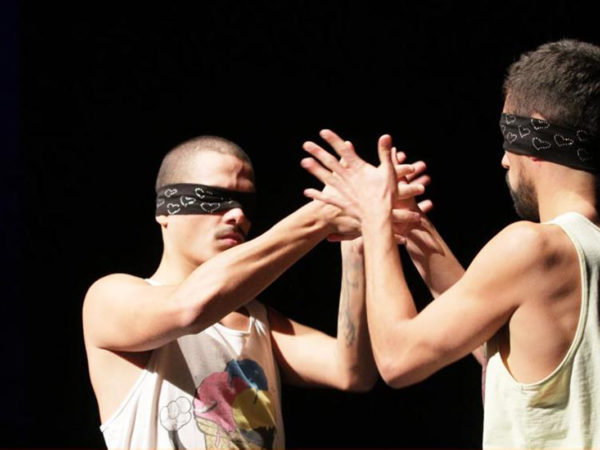 The company starts with an exchange of cashews in the dungeons of the old palace that belonged to the Marquês de Pombal, where Escola Superior de Dança (ESD – Superior Dance School) is currently located. This is when they discovered their first common interests: the love for nuts. That was the starting point for several other exchanges: from a carnivorous plant to the poems by Adília Lopes. The first piece, Cascas d’OvO, was choreographed in public gardens in Lisbon, with several onlookers, dogs and sparrows for an audience. A piece that would carry slaps and closed eyes across Europe and leverage the dancers’ palates for creating choreographies and for the integration of locals in their work: from the exquisite participation of amateur theater group Meia Via to the heat and livelihood of the people of São Paulo. In Matilda Carlota – second creation – they decantered music and used it as a form of expression, in a dome where robotic animals shared a baroque setting. This taste for endeavors into areas previously unknown to them has set their path. In Arrastão, the extent of this desire to establish music as a communicative and participatory vehicle is stretched to the maximum. In the future, they intend to move to Sintra, capital of romanticism, to wrap thoughts in the moss and to express other forms of art, blending steam and smoke.