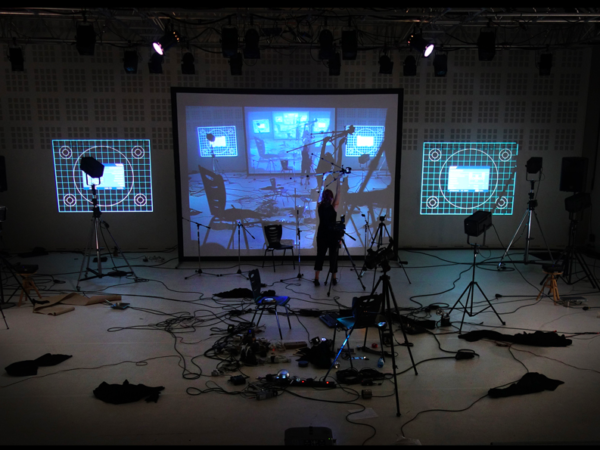 Olga Mesa. Choreographer and visual artist born in Avilés (Asturias), Olga Mesa is one of the figures of Spanish contemporary new dance. Since the 90’s her research on a personal and innovative body writing places her as a reference, asserting the space of intimacy within representation. Since 2005 she lives inStrasbourgwhere she was invited to be a resident artist at Théâtre Pôle Sud. On her works Olga researches on the writing of an experimental dramaturgy, that places itself deliberately on the border between dance, theatre, installation and film. She has made the camera her accomplice, and it’s thanks to it the she can combine the space/time experience and the formulation of the gaze, turning the body into an instrument of vision, which places her at the same time as subject and object of her narrative constructions.

The displaced image is recurrent in a distant staging, through which Olga Mesa seeks to reveal a body memory, making us think and perceive the world through it intermediary; questioning the vision and perception of the spectator in all her works. This sensitive and conceptual path is the result of an urgent need for new politics of the body and gaze, where the artist questions by means of her works -with a processual and experimental spirit- the presence of the other and the relationship with the world. Olga Mesa will be resident artist at Guimaraes 2012, European Cultural Capital (Portugal) where she’ll celebrate her 20 years of professional career presenting, among other projects, the absolute premiere of El Lamento de Blancanieves(Snow White’s Lament), fist chapter of her itinerary project labOfilm.

Francisco Ruiz de Infante.  Born 1966 in Vitoria-Gasteiz, Spain. Lives and works between Auberive, Paris and Strasbourg, France. Francisco Ruiz de Infante combines images, texts, sounds and objects into complex installations that embed advanced technology within rough-hewn materials, while at the same time infusing a rigorously critical conceptual framework with an assured poetic sensibility. Generally created in situ and often ephemeral in nature, Ruiz de Infante’s work is characterized by an aesthetic of “emergency bricolage” in which forces of construction and destruction operate simultaneously, giving rise to environments that appear to be at once unfinished yet already in a state of ruin. Yet although often seemingly precarious and fragile, Ruiz de Infante’s installations are in fact carefully orchestrated assemblages that function like three-dimensional drawings or diagrams, involving spectators in such a way as to transform them from passive viewers to active participants, and in the process subtly raising questions of individuality, choice and conscience.