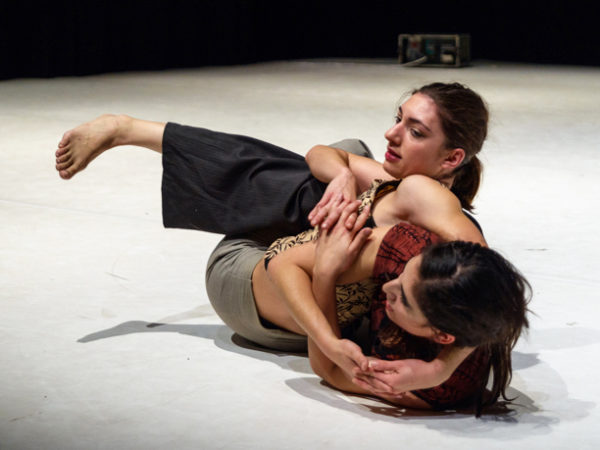 Roser López Espinosa graduates in contemporary dance in the MTD – Theaterschool / Higher School of Arts in Amsterdam. In 2005 she is awarded a danceWEB scholarship for ImpulsTanz festival in Vienna and trains with former coach of the Spanish olympic gymnastics team Jaume Miró. She dances in The Netherlands in Katie Duck’s Magpie Music Dance Company and with choreographers Pere Faura and Marta Reig Torres, whose piece More Day More Night is selected for the Nederlandse Dansdagen festival as one of the best productions of the season in 2005. In Barcelona she works mainly with Àngels Margarit / Cia Mudances, dancing in group pieces Flexelf, Kolbebasar, Capricis and the internationally renowned solo Corol·la. She collaborates as well with Cesc Gelabert and film maker Isaki Lacuesta, Iago Pericot, Bebeto Cidra and Las Malqueridas, among others.

She developes her own work in parallel since 2006, with pieces like The lizard’s skin, Còncau and Miniatura, which win international recognition with the First Solo Prize at Masdanza Festival, Second Prize New Tendencies at Burgos-NYcontest and Third Prize at Madrid choreography contest, are selected for European tour Aerowaves and tour throughout Europe: Julidans Festival in Amsterdam, Tanec Praha in Prague, Aerowaves Spring Forwards in Ljubljana, Terni Contemporary Creation Festival in Italy, among others, as well as in Library of Alexandria (Egypt) and Yokohama (Japan). In 2012 she makes Before We Fall and Stranger & Stranger (Festival Grec in Barcelona, co-produced by La Caldera in Barcelona and Circuit–Est in Montréal (Canada).

In 2013 she premieres the acclaimed duet Lowland in co-production with Mercat de les Flors in Barcelona. Lowland keeps on touring internationally at present: CDC – Les
Hivernales in Avignon, Aerowaves Spring Forwards Barcelona, Festival Temporada Alta in Girona, Korzo Theater in The Hague, Interplay Festival in Torino, Festival Prisma Panama, Festival Danzalborde in Valparaíso (Chile), Rencontres Essone Dance in Evry (France), etc. Lowland has a big reception from the media and the audience at CDC Les Hivernales in Avignon, with 10 performances with full house (2000 audience members). In 2014 she makes Hand to hand for Dutch company Conny Janssen Danst (Danslokaal program), in co-production with Dansateliers, being selected for the company spring tour 2015 in The Netherlands and starting a tour in Europe in 2016. She premieres November in the Moving Futures Festival 2015 in Rotterdam, in co-production with Dansateliers. Premiered in Barcelona in Sâlmon< Festival (Mercat de les Flors), it starts an international tour in Europe and Latin America.

In 2016 she premieres The flock, a group piece for 18 dancers based on Lowland for MTD2 in Amsterdam. The piece is immediately selected for the 30º Dutch Acrobatics Festival. The same year she also makes Solo for Sala da Ballo for RE-AL Dances in festival Teatro A Corte in Torino (Italy).

In 2017 she creates L’estol for the National Dance Production of Catalonia with the premiere in Mercat de les Flors in Barcelona and a following tour of 19 cities in Catalonia. In 2018 she creates The entertainers for dance company Skånes Dansteater in Malmö (Sweden), with upcoming premiere in Seoul Arts Center, in collaboration with Korea National Contemporary Dance Company.  Roser López Espinosa is an associated artist of La Caldera – Dance and Performing Arts Creation Centre in Barcelona. She is a resident artist in Mercat de les Flors de Barcelona for seasons 2018-2020. Interested in acrobatics and circus disciplines, she gives training and movement assistance for the performance L’home que perdia el botons by Circ Pànic (Kirkòlica Prize for Best Outdoors Circus Production in Catalonia 2012).

She is a teacher at Institut del Teatre – Dance Conservatory of Barcelona since 2013, a guest teacher and choreographer in MTD / Theaterschool in Amsterdam, ArtEZ Dansacademie in Arnhem (The Netherlands) and teaches workshops for
profesionals and advanced students internationally. She collaborates in the graduation project of SEAD in Salzburg (Austria) by teaching The lizard’s skin and Lowland. In 2017 she directs the evening long dance production Desván for Universidad Autónoma de Querétaro (Mexico). In 2016 Time Out Barcelona magazine ranks her as one of the most international choreographers of the new generation of makers from Barcelona. Her creation work has been programed at main European and Latin America international festivals as well as in Egypt, Canada and Japan.