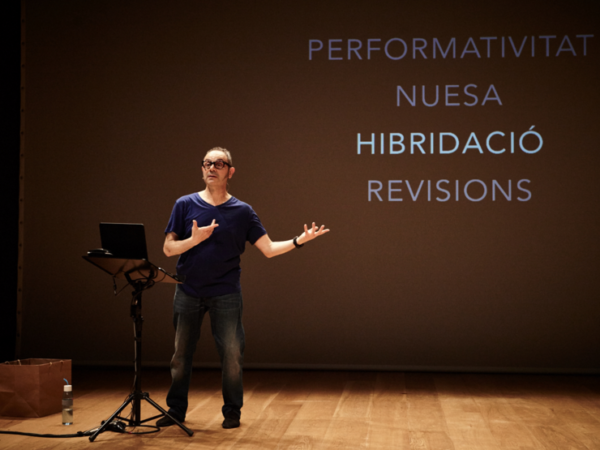 Toni Joder. Artist and dance teacher for over 25 years. He broadened his studies through several stays in the USA. He combines physical training of actors, work on postural awareness, speciality in jazz dance, and the holding of different movement workshops for students, professionals and artists from all spheres. During his artistic career he has given over 900 performances worldwide. As a dancer it is important to highlight his collaboration with Gelabert- Azzopardi (1989-2000, 2005-12). One of his particularities are his interventions as a performer in shows directed by: Albert Vidal (1978- 83), Carles Santos (1984-85, 1998-12), Jerome Savary (1986-87), Magda Puyo-Marta Carrasco (1997-98), Joan Baixas & Jordi Sabatés (1998). He has also collaborated with Dagoll Dagom, Comediants and La Fura dels Baus, among others. He is currently assistant director with the Gelabert-Azzopardi dance company and has collaborated, since 2000 with the Companyia Carles Santos, for which he has taken on choreographic responsibility. He habitually collaborates with the Auditori de Barcelona’s Education Service. He has choreographed Metàl·lics for Spanish Brass Luur Metalls, as part of the “L’Escola va a l’Auditori” and “Concerts en Família” cycles. He has acted as narrator at the “Orquestra per a joves” concert by Britten. In 2006 he was stage director for the project “El poble de vent i de fusta”. He combines his choreographic work with interventions as a performer. He created the spoken action: Toni Jodar, Explains: modern and contemporary dance, designed to raise awareness about dance and for which he received a Stage Arts Special Mention at the Ciutat de Barcelona Prize of 2002 and the APDC Prize of 2006
Beatriu Daniel. Arts producer and cultural manager, specialized in dance. B.A. In Philosophy- Fine Arts by the Universitat Autònoma de Barcelona. She gets her skills as cultural manager through experience and training with the Group Xabide (Vitoria), among others. She broaden her knowledge withstudies of coaching and NLP (Neuro-Linguistic Programming). In the 1970s, as co-Director of the Magazine DANSA-79, she had an key role in the development and creation of a contemporary dance scene in Catalonia, documenting all the activities of that period. She has worked with Gelabert-Azzopardi, Dance Company (she started the company together with Cesc Gelabert and Lydia Azzopardi in 1985), among others. Together with Catherine Allard, she started the project for the IT Dansa (Young Dance Company of the Institut del Teatre de Barcelona). Also, she coordinated the project TotDansa for the Bureau for Arts Promotion of the Diputació de Barcelona (City Council), as well as Ballarins a Palo Alto for TV3, Catalonia National Television. She has been Director of Administration of La Caldera; Centre for Dance and Stage Arts (2005-11), and member of the board of the Association of Dance Professionals of Catalonia (2005-11). As a producer she has worked on projects by La Fura dels Baus; on the Olympic and Paralympic ceremonies of Barcelona’92 (Ovideo-Bassat- Esport), and on the International Puppet Festival (Institut del Teatre de Barcelona). In the visual arts field she has worked with the artist Frederic Amat. She has also worked in cinema and TV for Ovídeo Productions.