The 2021 Sâlmon Festival didn’t end its path after its 9th edition, but cross fades all along 2021 with the 2022 edition. Unlike a typical fair, the Sâlmon is aware that “world-making activities dwell on processes, and the future discloses only if a process discloses it from the present”[1], and so it will keep its fire burning and fuel the live flow.

Throughout 2021, the four co-organizing structures of Sâlmon (Antic Teatre, La Caldera, Graner and La Poderosa), continue to share a collective space called BETWEEN, which emerges at different times with meetings, residencies, publications and actions around the performing arts, in dialogue with the sustained accompaniment over time that they already carry out in their spaces.

A BETWEEN that also welcomes the voices of other complicit international structures and the curatorial team of the 2021 and 2022 editions. A BETWEEN that is built as a place to continue making together, activating a new flow of ink, which marks the path to a Sâlmon 22, yet to be mapped.

[1] Amador Fernández-Savater in an interview published on the 29th of November, 2020, in El Salto.

/ BRUT NATURE
At La Caldera, from 31st May to 13th June.
Meeting that brings together a part of the creators hosted in residence at La Caldera. During two weeks they will elaborate their individual projects but also, and above all, they will enter and allow themselves to be intoxicated by the creative universes of others.
With: Anabella Pareja Robinson, Sara Gebran, Maïte Álvarez Gabriela Halac. Lluc Mayol and Iñaki Álvarez (nyamnyam).

/ LO IMPORTANTE ES EL PEINADO (The important thing is the hairstyle)
At Antic Teatre, from 3rd to 6th June.
Meeting about the lack of theory and criticism in the current live arts. A program that focuses on diagnosing the reasons or hypotheses for which this critical thinking gap is detected in the context of current live arts; Active references of critical thinking will also be shared, as well as the perspective of media professionals, all in an open space for debate and exchange between agents and audiences.
Idea and curation of the conferences by Antic Teatre team in collaboration with David Aguilar Sanjosé, Júlia Barbany Arimany, Marta Duran, José Miguel Gutiérrez, Juana Dolores and Sandy Moldavia. The artist and scenic researcher Rubén Ortiz will accompany them in too.

/ DELIR – Residence of Nina Botkay.
At La Caldera, from 16th June to 11th July.
‘Delir’ is an exercise in expungement. A little-used word, “Delir” is a verb to ‘undo’ or ‘dissolve a substance in liquid’, ‘erase’ or extinguish, vanish. A creative residence that explores the meeting of sound and the body, investigating concepts of expansion and dilution, occupation and disappearance, playing with the different scales of spatial presence.

/ PINK NOISE – Residence of Alina Folini.
At La Caldera and Graner, from 26th July to 22nd August.
‘Pink noise’ is based on the practice of deep listening with the desire to de-hierarchize the relationship between seeing, saying and listening. It proposes a bodily experience of tension between non-opposite poles, where the senses are not binary, to observe the various forms of collaboration, dissociation and resonance between orality, sound and movement.

The Sâlmon BETWEEN is a flow of actions that crystallizes a common work between Antic Teatre, La Caldera, Graner and La Poderosa. With the support of Iberescena, Generalitat de Catalunya – Catalan Institute for Cultural Companies, AC / E and Barcelona City Council – Barcelona Institute of Culture. In dialogue with workspacebrussels, Das Theater, Alkantara Festival, La Corvette and Santarcangelo Festival. 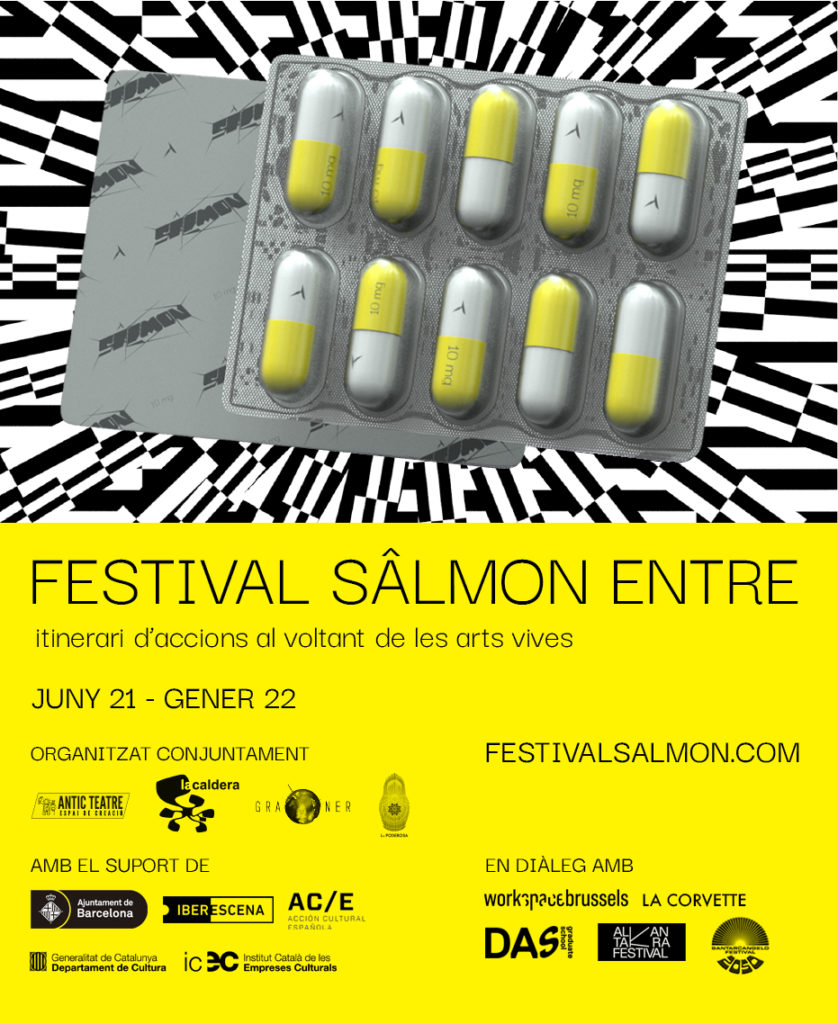